It's a long drive from Mcleod Ganj to Amritsar, so we'd decided to stop for a night at Pong on the way.

The journey from McLeod Ganj, down from the Himalayan foothills, across rivers and through valleys was probably the best part of this particular night stop! 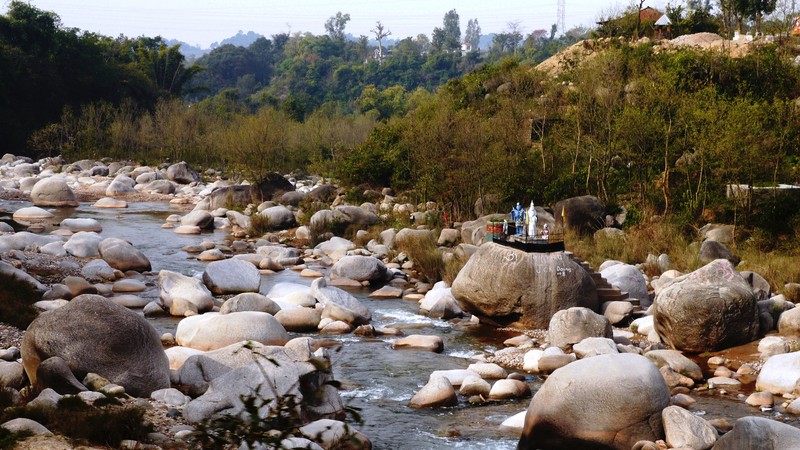 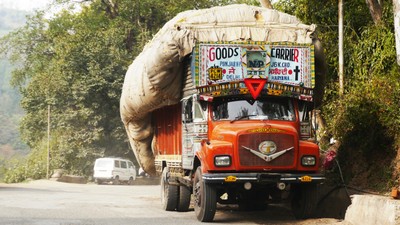 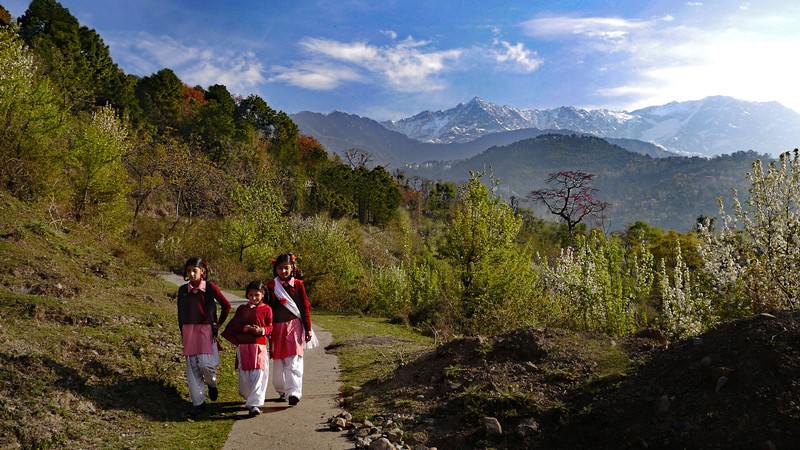 By the way, our destination wasn't 'Pong' the other half of 'Ping'. Nor 'Pong' the arcade video game. Not even 'pong' the disagreeable or offensive smell (although that's fairly close to the truth). I'm talking Pong the reservoir, the correct name for which is actually Maharana Pratap Sagar.

There's only one hotel, The Lodge at Pong. It turned out to be a carbuncle on the landscape with basic rooms, terrible food, dire management and a website that miserably failed to tell it how it was.

The view from the roof was lovely.

The boat ride on the reservoir was awful, as was everything else.

I thought about ending this blog right here, but you want to know more about why we didn't think much of Pong, don't you? So...

First, a confession. It was me who suggested adding Pong to our itinerary. Sorry, Janice. Sorry, David.

In my defence, may I add that:

- I hadn't been there before,
- we needed somewhere to break a long journey, and
- online research suggested that the reservoir had a reputation for its bird life - ideal, I reckoned, for a welcome rest and a spot of bird-watching.

There was a hotel there too, part of a group which also owned luxury hotels in Shekawati and Dharamsala, the latter being the residence of the Maharaja of Kangra. The one at Pong appeared to have a terrific view of the reservoir and promised on its website that this was 'a haven for resident and migratory birds' and 'you will enjoy a carefree boat ride...'.

How was I to know it was the runt of the litter and suitable only for those who'd given up the will to live? 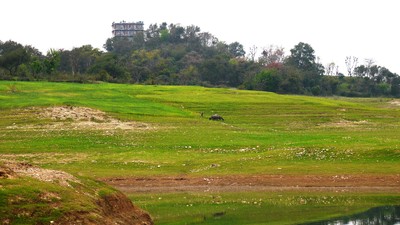 The concrete cube on the hill is where we stayed.

I'd booked our rooms by email four months in advance and reconfirmed them five days beforehand, yet when we arrived at the concrete cube on the hill it seemed almost as if we were unexpected. We offered our passports. The manager said they weren't required and didn't ask us to register - perhaps he preferred us to be non-existent, ghosts as far as the hotel's books were concerned and thus a nice little contribution to his back pocket.

We were shown to two rooms, one of which smelled worse than a sewer and had to be changed for another on the floor above. The other had curtains that, once upon a time, had been attached to the rail, and dirty windows that spoiled what could have been a great view towards the reservoir. Both rooms were bare and unloved.

We contemplated getting back in the car and continuing to Amritsar. With the benefit of hindsight, perhaps we should have.

However, we'd promised ourselves a relaxing afternoon and a boat trip on the lake so, after a mediocre lunch, we walked across farmland for about half an hour towards the lake, encountering only grass, mud and a few women gathering food for their livestock. 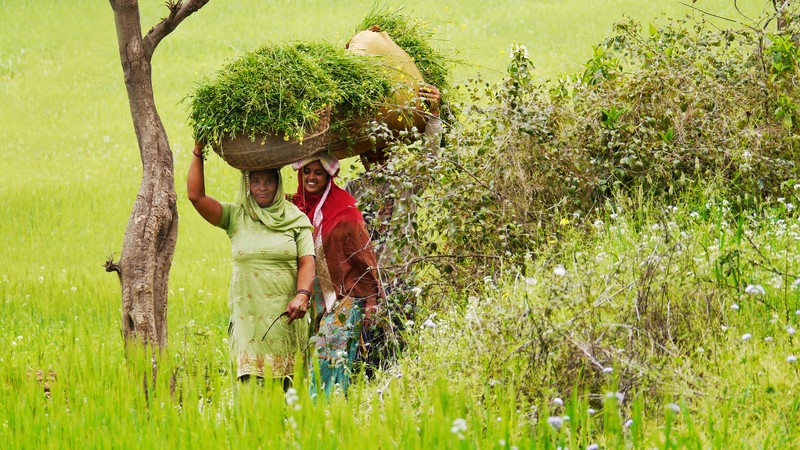 It was hot, and so were we by the time we reached the muddy shoreline. There, a dilapidated vessel with faded paintwork suggesting it once belonged to the local Fisheries Department (perhaps it still did) waited to take us on our 'carefree boat ride'. 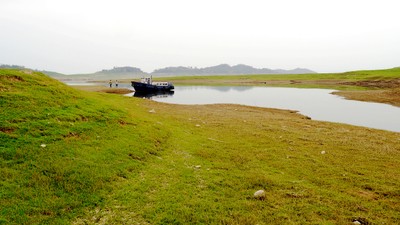 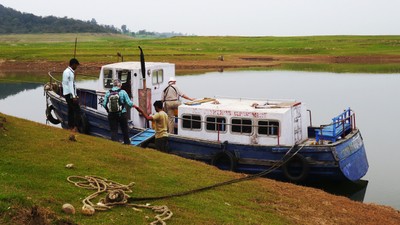 Out on the water, the boatman insisted that we could only travel along a small area in the middle of the nearest part of the lake because there were fishing nets strung out along all the margins. There was only a cool breeze on the water - no birds! Just a handful of common cormorants and a gull sat on an islet and even Janice and David's powerful binoculars couldn't identify any birds on the far distant land. 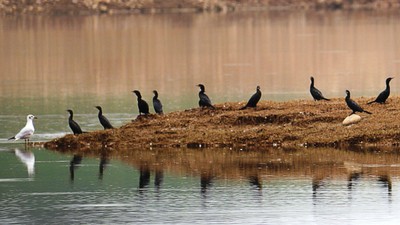 Thankfully, we returned to shore less than half an hour later and walked back to the hotel to cool off with a much-needed drink.

The only cold drink on offer was water.

We opted for tea.

Dinner that evening was lunch reincarnated. It obviously hadn't been good in its previous life as it came back in exactly the same form, right down to the last chapatti.

Afterwards, the manager enquired about what we'd like for breakfast. In the morning, it became clear that he hadn't passed on the information and we had to repeatedly ask the cook-come-waiter for every single thing. Breakfast took over an hour...

As we were about to leave, the manager appeared - in what were clearly his nightclothes - and scribbled the room and boat charges on the back of our food bill. Perhaps we did exist after all - in the restaurant anyway!

As they say: 'every cloud...' and our silver lining was simply that we'd broken the long journey without breaking the bank. Oh, and we'd enjoyed the view, at sunrise, during the day and at sunset. 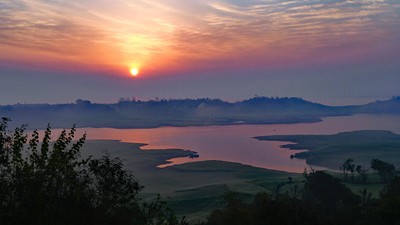 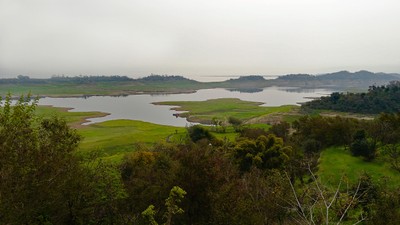 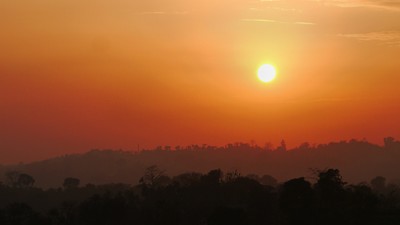 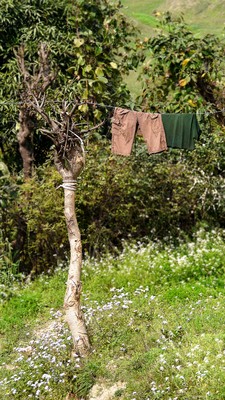 This last picture is the view of someone's washing hanging out to dry beside the hotel entrance.
It was there when we arrived - and still there when we left the next day!

If you search Google for 'Pong', you'll find just an arcade video game and a supplier of smelly cheeses. Long may that continue!

Accommodation:
The Lodge At Pong. Don't even think about going there.
Most of this blog is my one-star TripAdvisor review.

Great and funny! The concrete block on the top of the hill, no photos lol!