Camels with the hump!

Camels are not cute. They're not even pretty. In fact, some might say they're downright ugly.

They regurgitate their food and chew it with protruding teeth, sideways.

And they don't smell good either. 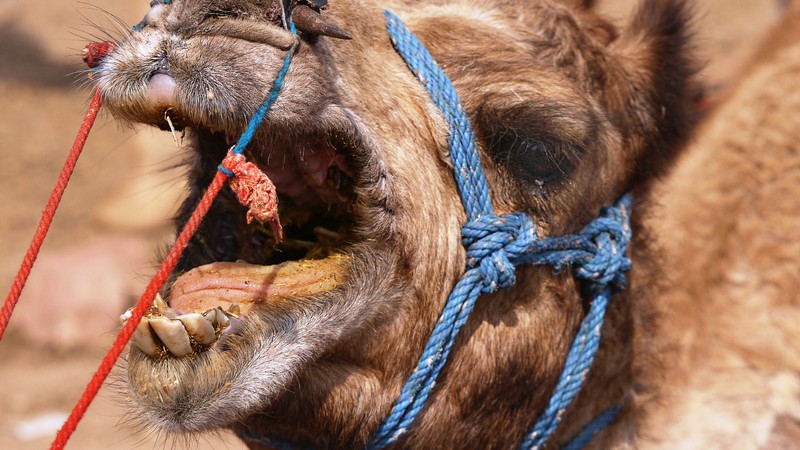 Nevertheless, we thought Nagaur, home at this time of year to the second-largest livestock fair in India, would be a good place to break our journey north from Jodhpur. So, our itinerary included a brief stop to see the camels, cows and horses and to find lunch before driving another few hours to our pre-booked night-stop at Roopangarh.

What we didn't know until we met Devendra at the Maharani Bagh in Ranakpur (see: 'Home, sweet home') was that her father, Karan Singh Bhati, was in charge of the Royal Tents - a fabulous tented hotel currently pitched, especially to cater for visitors to the fair, on the former polo ground inside Nagaur's Ahichattragarh Fort. The day after meeting her, Devendra phoned to say that she'd arranged for her father to meet us when we reached the fort and that he'd help us enjoy our visit. What a kind and thoughtful family they are.

So it was that, at the entrance to the vast fort, the guard was expecting 'Mr Mike' and we were all duly escorted to meet Devendra's dad, the convivial boss (so we now discovered) of both the hundred or so luxury Royal Tents and 33 deluxe Ranvas rooms that have been lovingly created from buildings which once formed the Ranis' (Queens') residences within the fort.

Karan promptly organised a member of his staff to give us a private tour of the historic fort, joining us later to show off the splendid accommodation and to host us for lunch in the beautiful Akbari Mahal. This was hospitality beyond our wildest dreams. 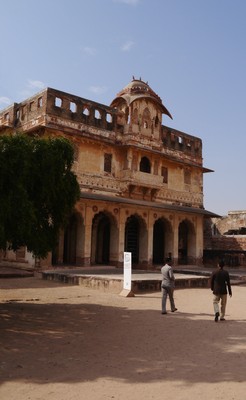 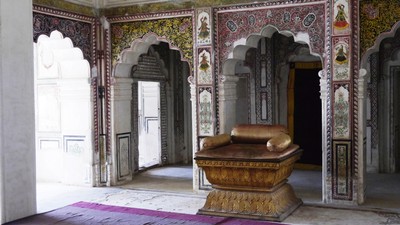 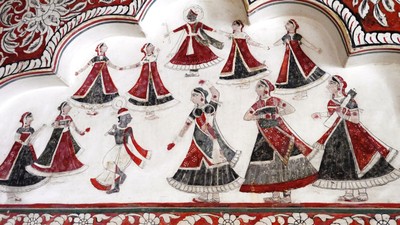 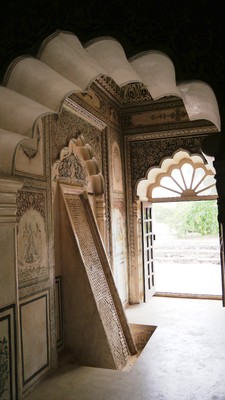 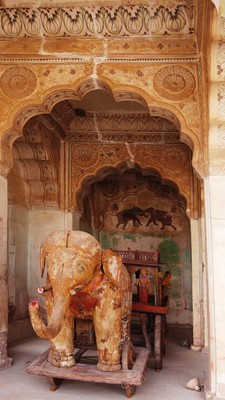 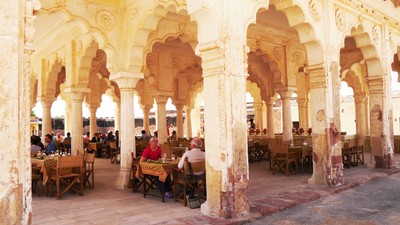 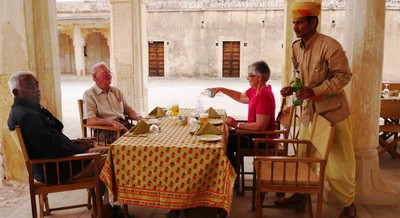 The whole fort complex covers 35 acres and comprises four main palaces and dozens of smaller buildings surrounded by two massive fortification walls. It's owned by HH Maharaja Gaj Singh II (of Jodhpur), although it was only returned to his family by the state in the 1990s, when they decided they couldn't afford to maintain it any longer. For forty years before that, the government had housed its Border Security Force there. This spectacular Rajput-Mughal edifice dates back to the 12th century yet, while the BSF was there, delicately-painted walls were plastered over, glorious halls were partitioned into offices and unguarded parts of the fort fell victim to looters.

In 1998, His Highness urgently set about saving the fort, restoring and conserving before it fell into total ruin. Encouragement came from his friend HRH Prince Charles, a patron of the Maharaja's Mehrangarh Museum Trust. Charles visited the fort during his 2003 tour of India to see how the work they'd spoken about a few years before was now coming along. More than US$ 500,000 cash for the restoration project had come from the J Paul Getty Trust!

A great example of the Maharaja's business acumen, in 2002 this work won him a coveted Asia-Pacific heritage conservation award from UNESCO. Although much of the fort is now restored to near its former glory, conservators were still beavering away during our visit uncovering some of the treasures that lie beneath years of neglect. 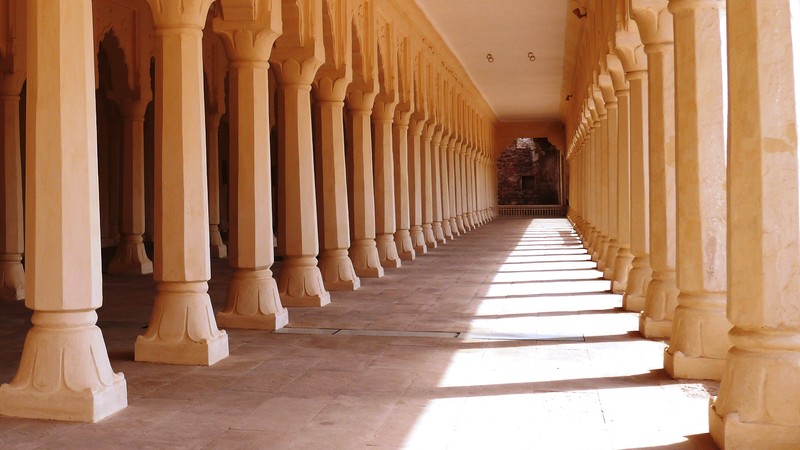 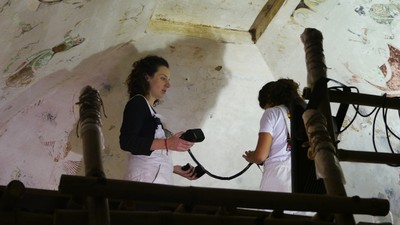 After our tour and a most enjoyable lunch, Karan sent us off with one of his staff, smartly dressed in white coat, white trousers and bright-red turban, to the dusty fair ground on the outskirts of the town. Here, some 70,000 animals - camels, bullocks, cows and horses - are traded every year. Many of them were lavishly decorated with coloured nose rings, painted horns and clipped coats. Some of their owners too were dressed to please, with colourful turbans and manicured moustaches. Alongside, overloaded tractors carried feed for the animals and stalls sold everything you could ever need for your camel - bridles, saddles and gaudy garlands of all shapes and sizes. 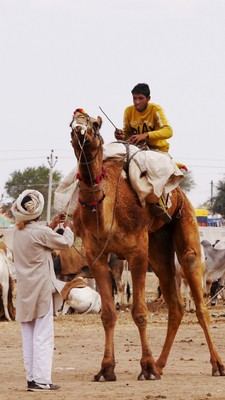 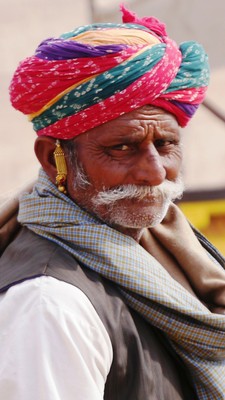 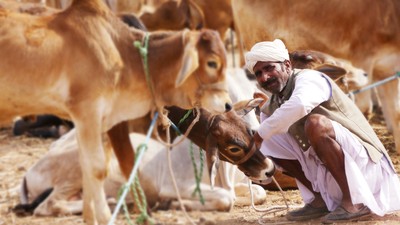 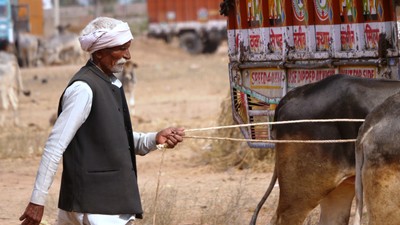 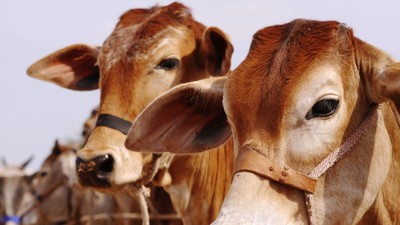 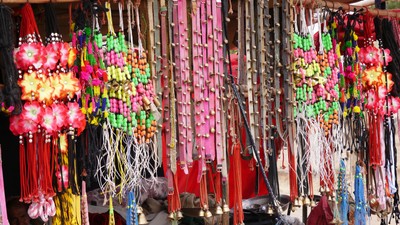 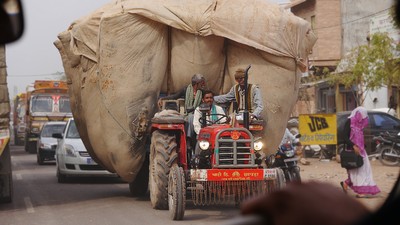 We spent an enjoyable hour or so admiring and photographing the assortment of animals and owners. Some of the camels had undergone transformation with elaborate designs clipped into the hair over their entire bodies; these must have taken many hours of work - scroll down to see photos of just some of these. 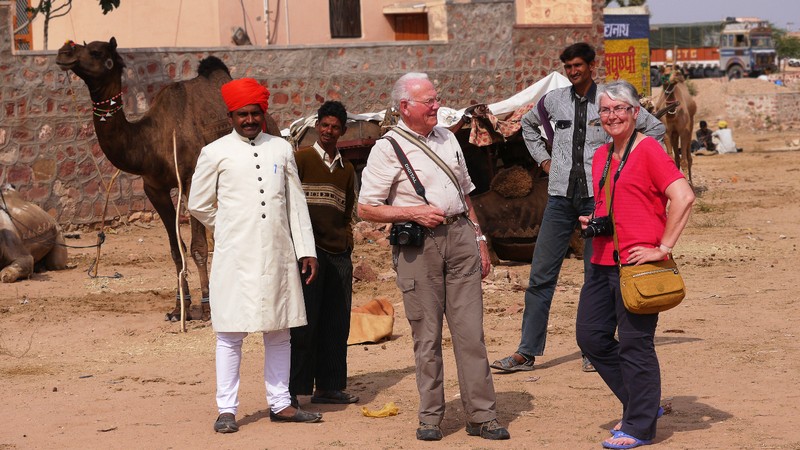 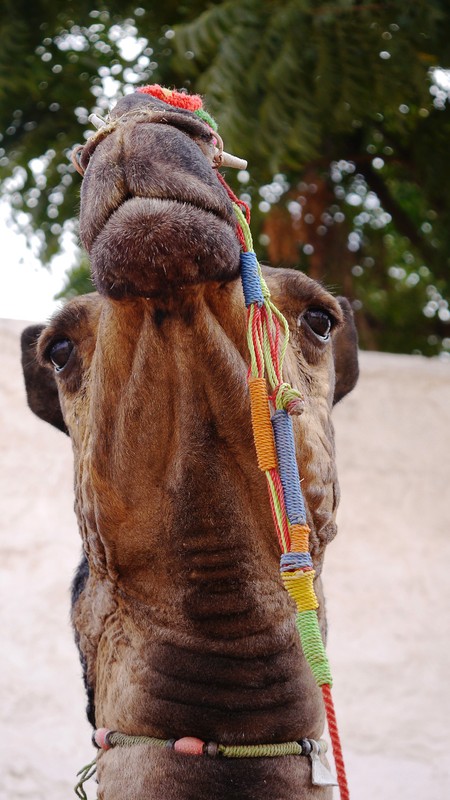 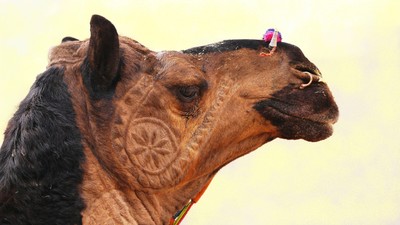 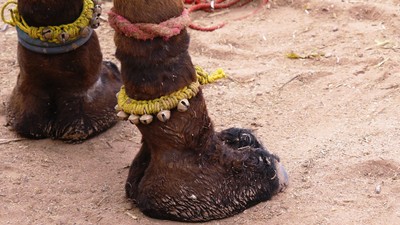 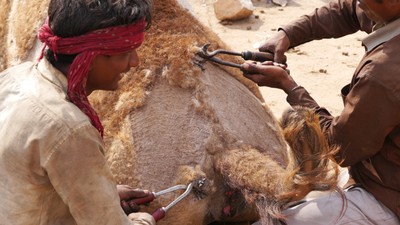 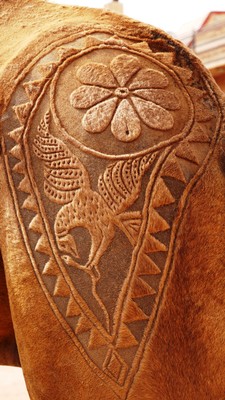 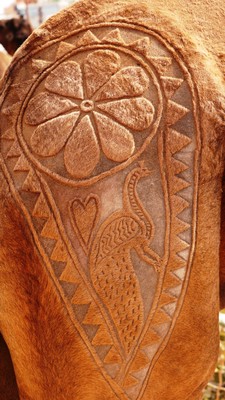 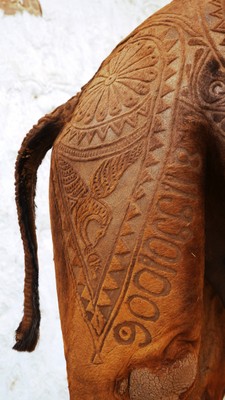 We certainly learnt a lot about these strange animals too:

They can drink 200 litres (44 gallons/53 US gallons) of water in three minutes, yet their urine still comes out as a thick syrup!

Their eyes have a nictating membrane (a transparent third eyelid to help brush away sand particles).

They can live for up to 50 years, they mate in a sitting position, and they can run at speeds of up to 65 kms per hour (40mph) - not necessarily in that order.

Oh, and they are most certainly cantankerous and smelly!

What had started life as a brief detour had become much more - a visit to a restoration miracle, a royal lunch, and a guided tour of a fascinating fair - all thanks to the kindness of Karan and his thoughtful daughter.

We could easily have lingered longer, but we still had a long drive to our night-stop, and another impressive fort, in Roopangarh...

Accommodation:
We didn't actually stay at Nagaur, but continued to Roopangarh for the night. However, if there was ever an opportunity in the future, we'd have no hesitation in splurging at the amazing Royal Tents (Double: Rs14,500 - about £175 or US$265 - per night including all meals, plus taxes - at the time of our visit). 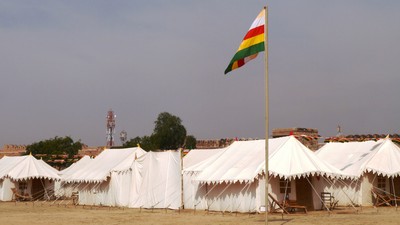 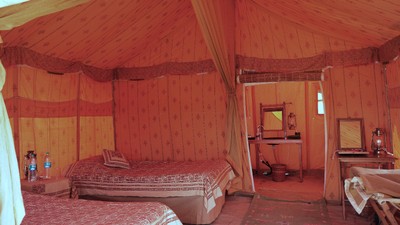 They're cool, comfortable, very well-equipped, and the food and service are of the highest standard. The delightful Ranvas might be even better (suites from Rs12,000 to Rs18,000 - about £145 to £220 or US$220 to US$330 - per night with breakfast, plus taxes) for characterful, spacious and extremely comfortable accommodation with absolutely superb standards of everything.