When you've visited somewhere quite often, it becomes difficult to find anything very new to say about it, doesn't it?

I've been to the hot and humid city of Mumbai (Bombay) four or five times, most recently in 2009 (Mumbai's extremes) when it was a convenient place to meet my young Rajasthani friend on our way south to Kerala. This time, it was a convenient place to start a tour to the north with my travelling companions, the 'Grey haired nomads' - my elder brother David and his wife Janice, neither of whom had been here before. They like peaceful, wide open spaces and don't normally do cities, so I think they were a bit overwhelmed by it all. Well, this is one of the most heavily-populated metropolitan areas in the world with over 20.5 Million people crammed into it. To put this into perspective, that's more than the populations of London, Paris, Rome, Madrid, Berlin and Vienna combined! 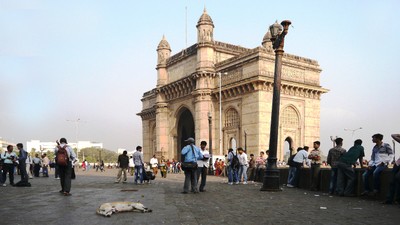 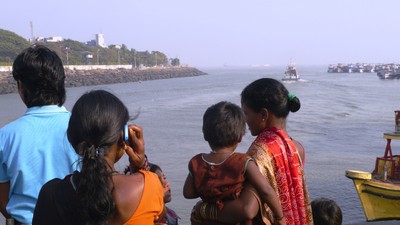 The Gateway of India, Mumbai


It's also the commercial capital, a global financial hub and by far the wealthiest city in India. This you'd only realise by looking at some of the modern tower blocks, glass skyscrapers and tall apartment buildings, which loom above cramped and dilapidated dwellings that house the average Mumbaiker. 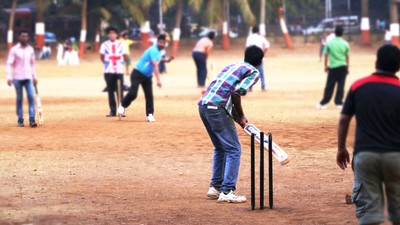 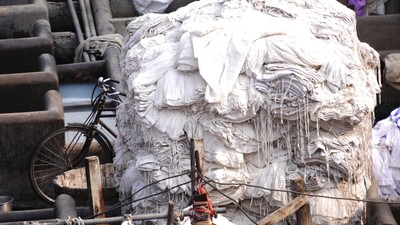 Cricket on the Maidan Oval (one of dozens of casual games in progress) and at Dhobi Ghat, a huge open-air laundry where mountains of sheets and shirts are cleaned daily 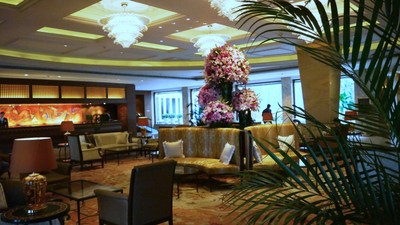 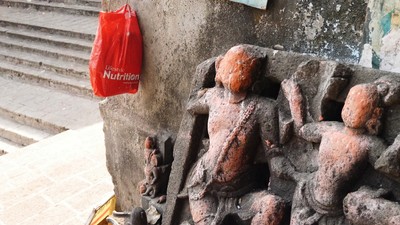 Inside the Taj Palace Hotel - a world not familiar to most Mumbaikers and statuettes at Bang Ganga, a man-made tank, holy because it is believed that the water came from the Ganges. 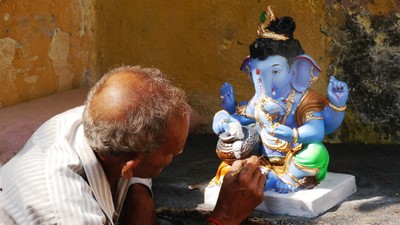 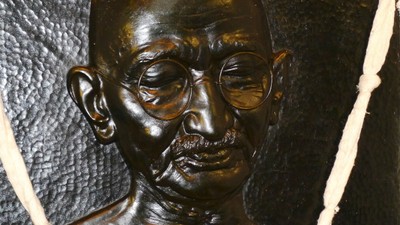 A statue of Ganesh being painted in preparation for a festival worshipping this four-armed elephant god and memorial to Mahatma Ghandi inside the house where he lived and which is now a museum devoted to his life and work. 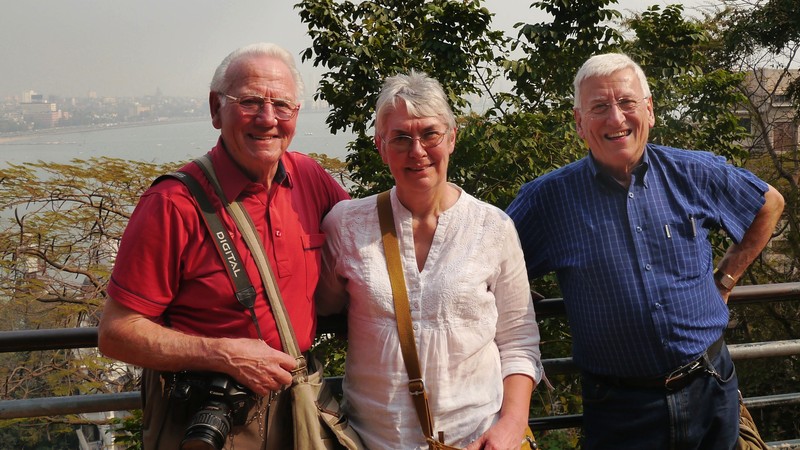 Look out of any five-star hotel window and you'll see families living in the streets or in makeshift shanty towns. Poor public-health facilities, limited educational opportunities and unemployment are all familiar scenes to the half of this city’s population which lives in a slum dwelling of some sort.

While I've included some pictures of the touristy things we've seen during our two days here, I'd like to say a bit about a place in central Mumbai called Dharavi. It's a place that most tourists don’t see – or possibly don’t want to believe actually exists. Perhaps they prefer to bury their heads in the sand, thinking that Danny Boyle’s film Slumdog Millionaire was produced in a studio rather than on location.

Dharavi is the second-largest slum in the whole of Asia (it was once the first-largest, but has now been overtaken by Orangi Town in Karachi, Pakistan). Dharavi’s population of over a million live cheek by jowl on about one square mile of land that was once a mangrove swamp. It's right in the middle of the city and that means it's potentially threatened by development. Certainly, government rehousing schemes have been talked about for years but it's likely to be a good few more before they come to anywhere near fruition.

Meantime, I find it to be one of the most inspiring places I've ever been to anywhere in the world and firmly believe all visitors should see it first-hand if they’re to experience a balanced view of life here in Mumbai. Don’t attempt to visit it on your own though – it’s a rabbit warren of alleyways, open drains and tangled power lines. You’ll need to be accompanied by someone who knows their way around. I heartily recommend Reality Tours & Travel . I’ve been with them twice and they do a great job. A hefty percentage of their profits goes – by way of their registered charity Reality Gives - to support community projects in the slum, some of which you’ll be able to see in action. They’ll also combine the slums with a sightseeing tour of the city, if you wish. 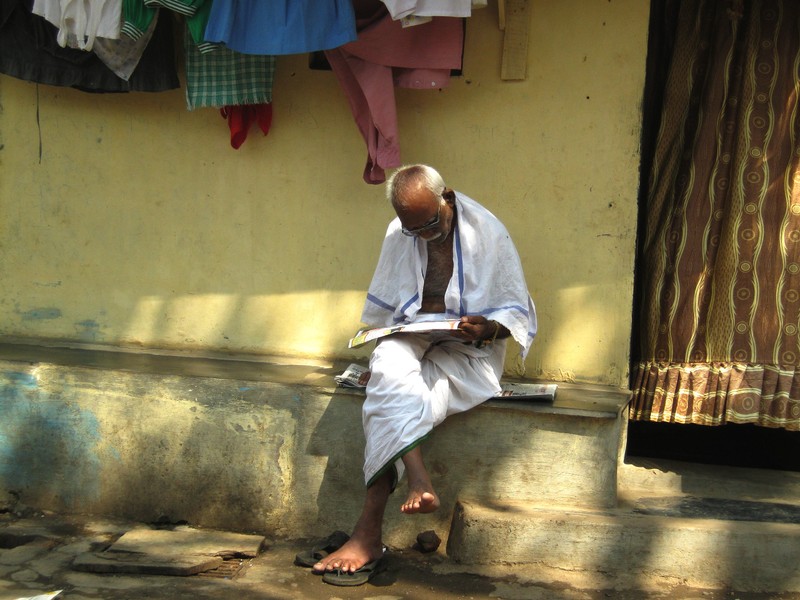 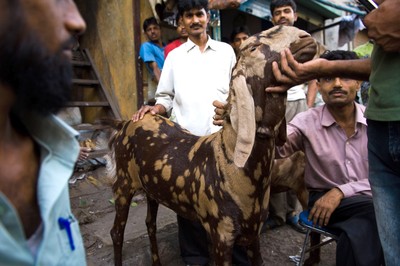 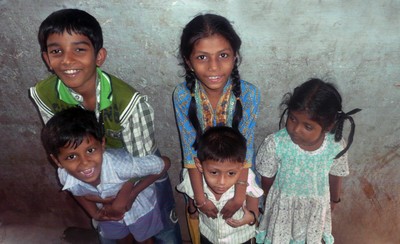 You’ll see the increasingly large recycling industry, processing waste from other parts of the city and even some from overseas. Much of it’s plastic in all shapes and forms, from old mineral-water bottles to computer casings, that’s ground into pieces, washed, melted down and coloured ready to be made into something new. There’s also a thriving industry that takes metal cooking oil containers, cleans them inside and out and sprays them with red oxide paint to be reprinted with another brand name and refilled. Cardboard boxes are recycled and small enterprises that might be everyone’s image of sweatshops print fabric or stitch it into garments for the home market. There’s a community of potters making containers for water and cooking pots and you’ll often encounter areas where poppadom (papad) are being dried in the sun over basketware frames. It’s a busy place. 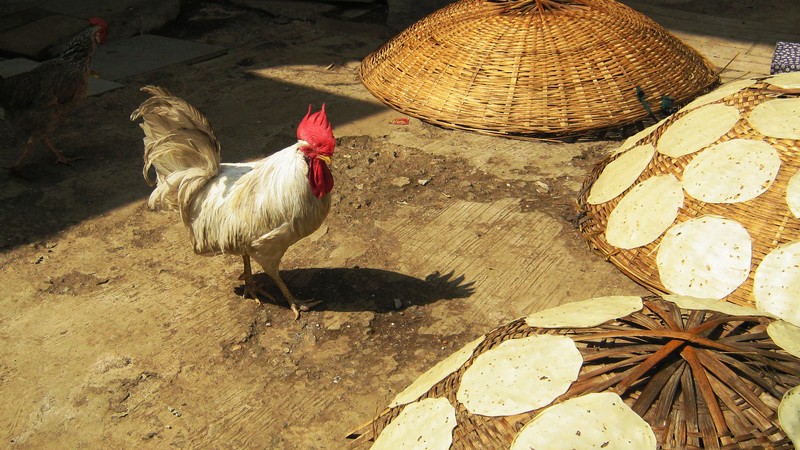 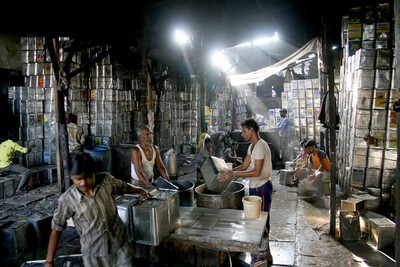 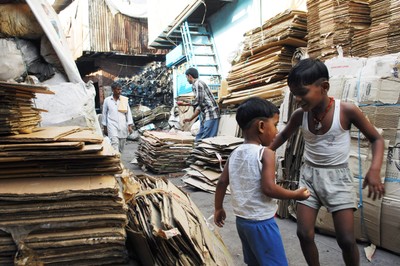 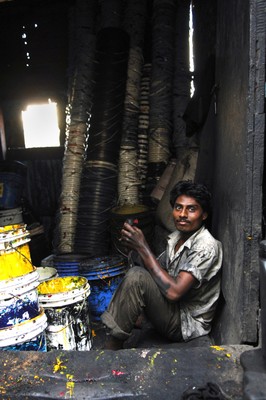 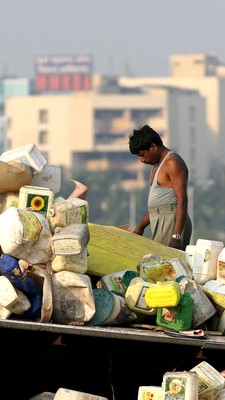 Yes, there are places where open sewers scent the air and rubbish sits in piles waiting never to be collected. Yes, you have to be careful where you put your feet. Yes, there’s a health and safety issue around every corner. However, you’ll see only happy faces - faces that are happy with their lot might be a better expression perhaps. Children making their way to school wear smart uniforms, the girls with their long black hair neatly plaited and tied with matching ribbons. All politely return your ‘hello’ greeting.

You certainly shouldn't take photographs yourself while in the slums (it’s not a tourist site and the people's poverty is not a sideshow!), so those above have been kindly supplied by Reality Tours & Travel. Some were taken by children living in Dharavi as part of a photography project run for them by Reality Tours.

If you’re in Mumbai and have half a day to spare, visit Dharavi. It’ll bring new meaning to your understanding of how the other half lives.