To the south-east of Agra, in the city of Allahabad, a mass protest had begun about pollution of the Yamuna River.

For years, industrial waste and sewage has been discharged into this river, the largest tributary of the sacred Ganges, from drains on the outskirts of Delhi far away to the north. It has become officially 'dead' by the time it runs beside the Taj Mahal in Agra. Now the masses were heading up to Delhi on foot to voice their concerns to parliament and doubtless to Delhi's Chief Minister herself, the appropriately-named Mrs Sheila Dikshit.

By 'masses' I do mean masses! What had started off as 10,000 farmers, sadhus, union activists and members of religious and social groups had already swelled to many times that number. Yesterday morning, they blocked the Agra-Delhi highway with parked trucks and started marching the 60 kilometres from Agra to Mathura. They would be joined by Krishna devotees from Vrindavan, just outside Mathura, and it was thought there could be more than 100,000 people in the march when it eventually reaches the capital.

We too were heading for Delhi and planned to visit spiritual Mathura on the way. We had to hope that the marchers reached Mathura before us. 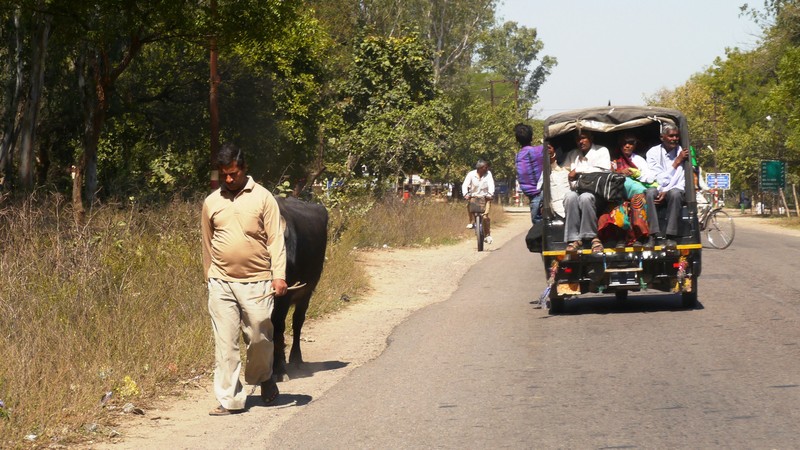 On the road to Mathura. Unusual sights: A cow being lead along the road - not left to
its own devices, and a tuk tuk taxi with only ten people in it - there are usually at least a dozen! 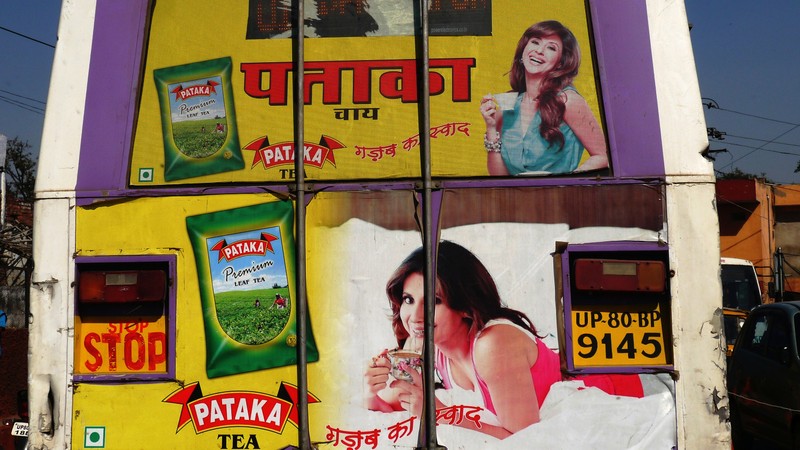 Faces on the back of a bus. Most Indian women aren't the Western lookalikes seen in advertisements.

Fortune smiled on us and we reached Mathura without any problems - just the usual hazards of ambling cows on narrow roads and an occasional lorry coming towards us in our lane on dual carriageways! The protesters had already been, slept and continued their journey, taking the AH1, the old Asian Highway, towards Delhi.

Mathura is the legendary 'birthplace of Lord Krishna' (which translates as 'Shri Krishna Janmabhoomi') and it's a major pilgrimage site. Krishna is the handsome Hindu deity usually shown with blue skin, a yellow dhoti and a peacock feather crown, sometimes standing with one leg bent in front of the other playing a flute. He's often accompanied by cows and a bevy of milkmaids. As the eighth avatar of Vishnu, the Supreme God, he's extremely important. 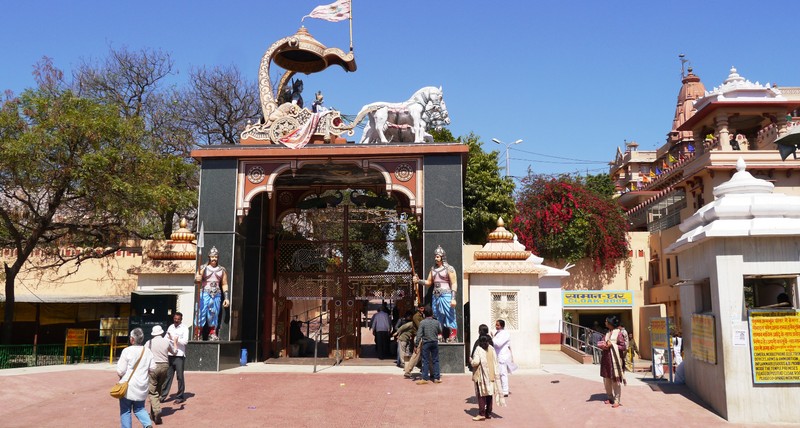 The entrance to the 'birthplace of Krishna'. 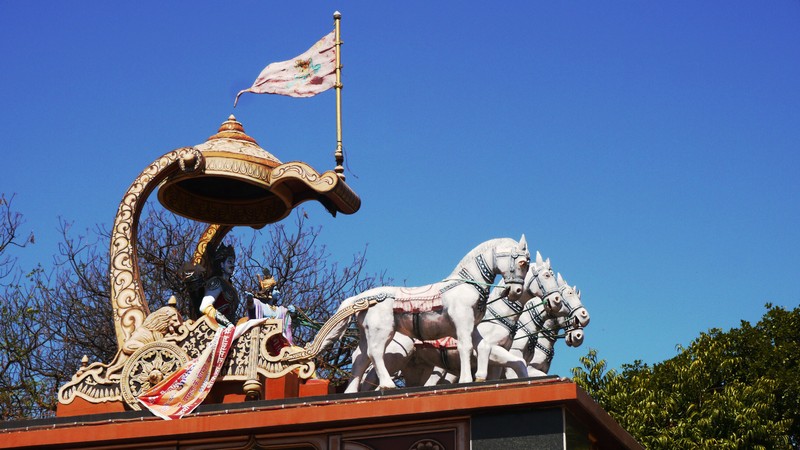 Photography isn't allowed inside the temple complex. This is a statue of Krishna on top of the entrance gate.

Most people, at some time or another, will have encountered the Hare Krishna Movement - more properly known as The International Society for Krishna Consciousness or ISKCON for short. They're a cheerful group of people with cleanliness, mercy, austerity and truthfulness as their principles. The Beatles met them on a visit to India in the late-1960s and the hit 'My Sweet Lord' duly followed in 1970 (in the days when songs weren't songs unless they were at least four minutes long!).

You may have heard the mantra 'Hare Krishna, Hare Krishna, Krishna Krishna, Hare Hare, Hare Rama, Hare Rama, Rama Rama, Hare Hare'. I certainly have. It, or at least the words 'Hare Krishna', featured in quite a few tracks, not only by members of The Beatles, but numerous other singers throughout the 70s. I've sometimes heard it when calling in for a vegetarian lunch at Bhaktivedanta Manor, ISKCON's UK headquarters, after shopping at Costco's warehouse in rural Hertfordshire. This stately pile and the surrounding farmland was donated to them by the late George Harrison, himself a Krishna devotee, who famously once said: "All religions are branches of one big tree. It doesn't matter what you call Him just as long as you call". Incidentally, if you've ever wondered about holy cows, karma and reincarnation, you'll find answers on the Bhaktivedanta website.

Krishna spent his childhood at Vrindavan, mentioned earlier in this blog, and there you'll find the Krishna Balaram Mandir, better known as the ISKCON Temple. Uniquely among the thousands of Vrindavan's temples it's well equipped to deal with accommodation and meals for foreign visitors and consequently attracts Hare Krishna pilgrims from all over the world. The Hare Krishna, Hare Krishna... mantra has been sung loudly there continuously, 24 hours a day, non-stop, for many years! 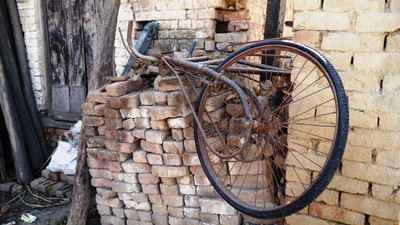 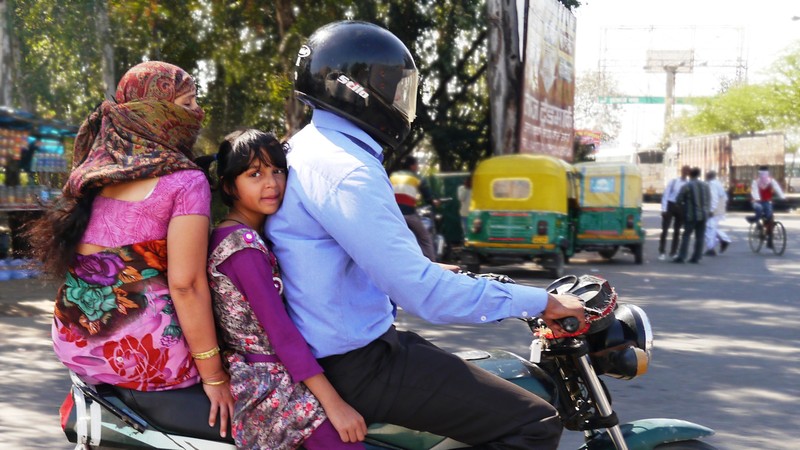 Only three-up! Father wearing a crash helmet driving the motorbike, mum sitting side-saddle
on the back with just a scarf on her head, daughter in the middle with no protection whatsoever.

Krishna was born in an underground prison. Like most Hindu legends, it's far too complicated for me to even begin to explain what his parents were doing in prison and how Krishna subsequently rose to fame. Sorry.

Anyhow, it's believed that the first temple was constructed here, on the site of that prison, almost 5,000 years ago. In the Shri Krishna Janmabhoomi complex, next to the vaguely-interesting Kesava Deo Temple, is a small, solid-brick room rather like a dark, ornately-decorated prison cell. This is revered as the actual birthplace. It has similarities to the grotto at the Church of the Nativity in Bethlehem, believed to be the 'birthplace of Jesus Christ'. It's certainly as glitzy, crowded and claustrophobic - as is the nearby market with its colourful pottery stalls and barrowloads of fruit. 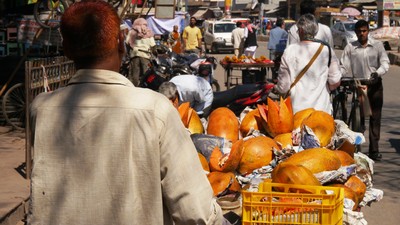 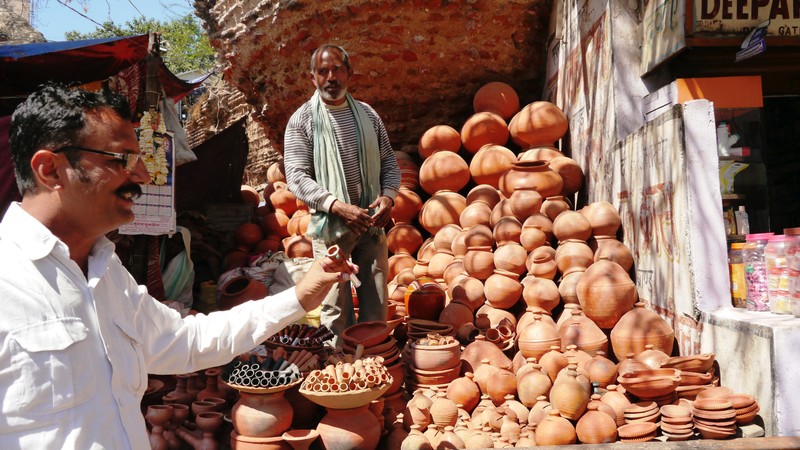 The clay pipe being shown to us by our driver Yadu was for smoking ganja (aka marijuana, pot, cannabis, weed).
He was only showing it to us, not buying it!

Krishna, it is said, was fond of milk and milk-based sweets. Perhaps as a result, Mathura has become known for sweet, gooey, brown, cardamom-flavoured, caramelised milk specialities called 'pedas'. They're too sweet even for me and, not to put too fine a point on it, I think they look a bit like camel droppings (see picture). Yadu, our driver, bought a huge bag of them for his kids! 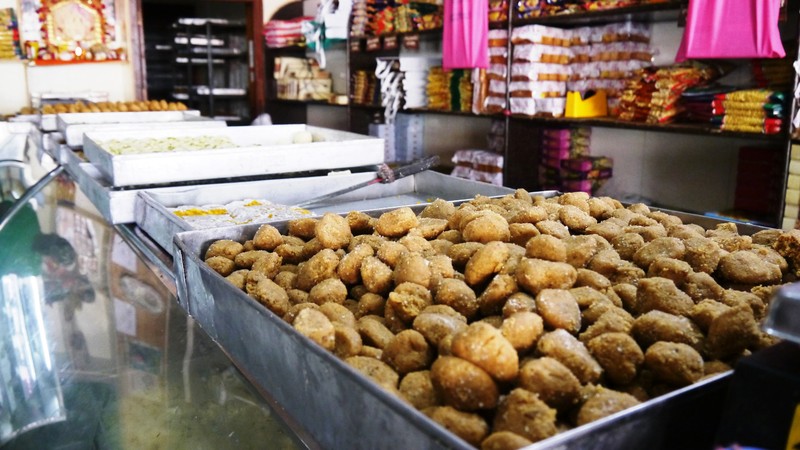 Pedas - see what I mean about camel droppings?