What do you think the White House, St Paul's Cathedral, Sydney Opera House and the Taj Mahal might have in common?

The whiteness of the buildings is, of course, your big clue - and not only because they've used white marble in their construction. Uniquely, they've all used white marble taken from the quarries at Makrana in northern Rajasthan.

And it was to Makrana that our journey would now take us on this hot and sunny afternoon. We'd just had an excellent lunch, a fascinating tour of the fort at Nagaur and an hour or so admiring the Camels with the hump!, so we dozed awhile in the comfort of our air-conditioned Toyota Innova as Yadu ably drove, occasionally along roads seldom frequented by motor vehicles - yet alone tourists, for the next two hours. It seemed longer. And we were running late. So, we didn't actually stop at Makrana, but we did drive slowly past some of the quarries and mile after mile of marble dealerships displaying their wares. 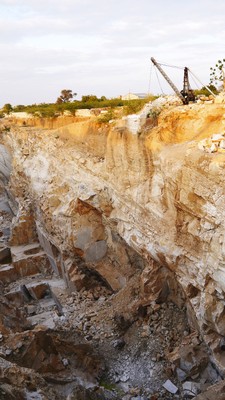 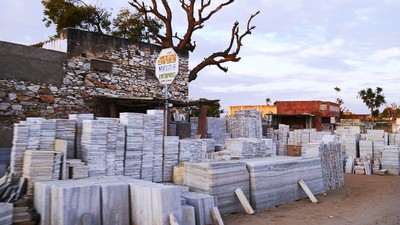 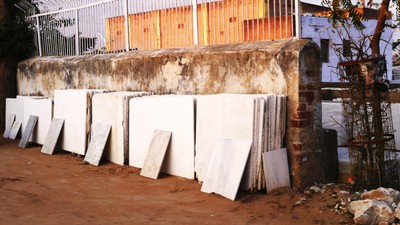 Marble, as you know, comes in a variety of colours - white with grey bits, white with brown bits, white with swirls, white with straight lines, white with all manner of patterns and, of course, the very finest pure, pristine white. Here, its colours depend on which of the 400 quarries in the Makrana area it comes from. Millions of tonnes of it come out of the ground hereabouts every year. Some 40,000 labourers work in the quarries and another 60,000 in the surrounding villages depend on it for their livelihood. It's believed to be the oldest marble in the world. It's certainly the very best quality and the shiny plain white, now available in declining quantities, is much sought after by architects all around the world - so it's very big business. Cut and cleaned, it sells for anything from 30 to 2,000 Rupees per square foot - that's £0.36p to £24 (US$0.55cents to US$37 or €0.45cents to €29) per square foot (plus shipping!). I've no idea what it costs in metric sizes - suffice to say: the bigger the piece and the whiter it is, the bigger the bill.

It was another hour southwards before we reached the town of Roopangarh. The sun was going down as we drove, with difficulty, through its main street, ultra-narrow in places where shops and houses encroached onto the grubby roadway, making it necessary for Yadu to brake hard or back up if even a motorbike came towards us.

The road lead only to the Fort named after the town (or should that be the other way around - see A 'garh' is a fort). There, Yadu's driving skills were put to the test by a winding entrance gate designed to thwart attackers on elephant-back. Several three-point turns later, we unloaded our bags at the foot of the steps up to the imposing palace, for this was where we were to spend the night. With hindsight, perhaps we should have planned to stay longer here. It was to prove one of many highlights of our tour so far. 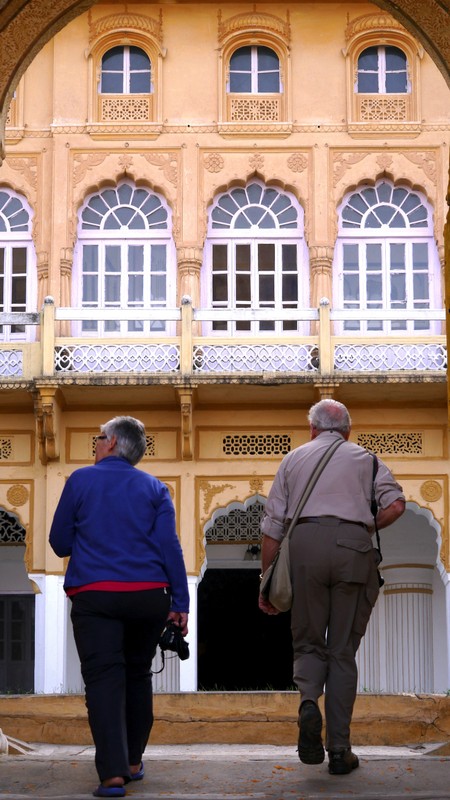 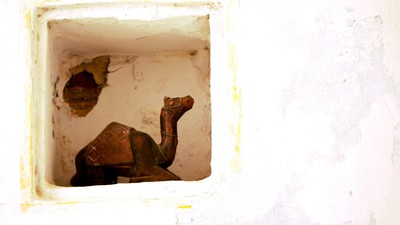 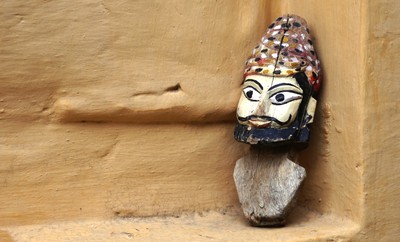 The fort and the palace inside it were originally built by Maharaja Roop Singh in the 17th century on a strategic hilltop controlling the trade route to Sambhar Salt Lake (to which we'd be travelling tomorrow). In 1999, the present maharaja opened it as a hotel, leaving the interior and exterior little changed. Let's be clear about one thing - the fort has been renovated, not restored, so it retains its ancient space and character, warts and all!

It has 20 rooms, some of which are former royal suites with antique furniture and colourful traditional furnishings - like the two vast rooms we were given. They appeared sparsely furnished, not surprising really as each was the size of a soccer pitch with a ceiling so incredibly high that you'd need scaffolding just to do the dusting. There was a terrace at the front to catch the sunrise and another one at the back for sunset. In one wall of each was a window looking down onto the hotel's restaurant, for the rooms were once the maharanis' domains and they'd have used the windows to peer down onto what was then the Durbar Hall to see what the maharaja and his chums were up to. 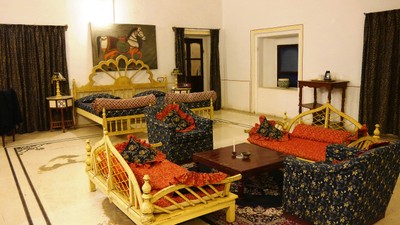 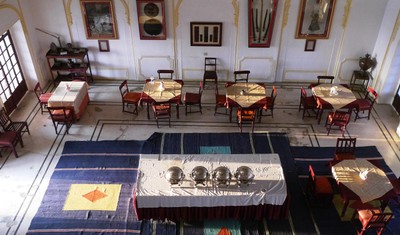 In the courtyard, we enjoyed a rest on wicker chairs drawn up around a fire pit before an enjoyable evening meal. Nearby was a tennis court, sometimes used for cricket too, and a terrace where noisy peacocks roamed in the early morning sun. 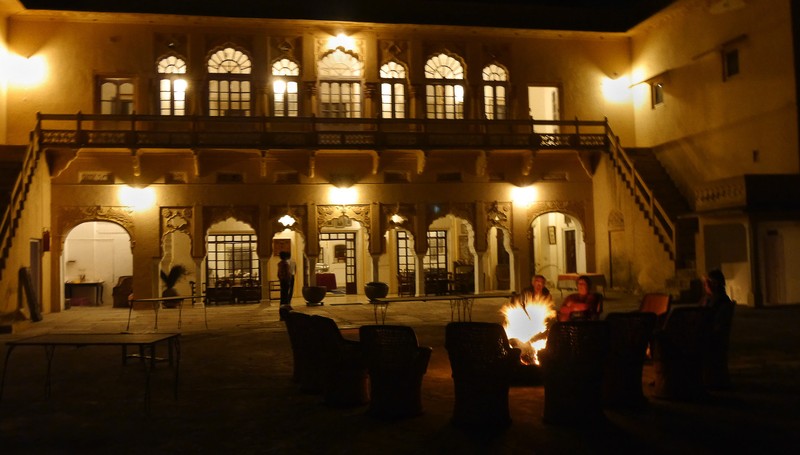 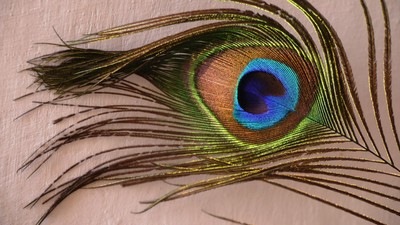 One of the friendly staff proudly showed us the Queen's Suite - a huge, ornate room with an equally huge bathroom, a gallery above and a staircase to a private roof terrace. Maybe we'll book that next time. 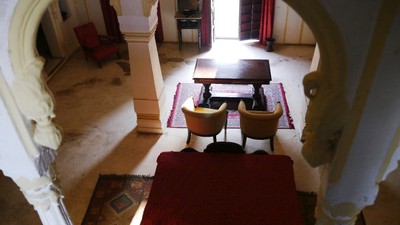 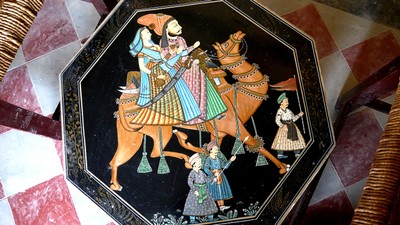 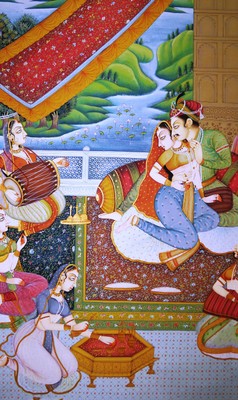 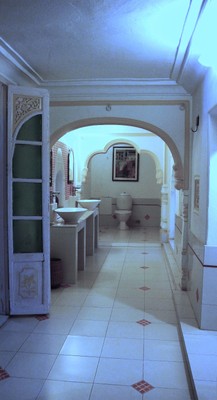 Early next morning, we ventured forth into the town just as the little shops started to open their doors. A few people sat outside reading newspapers, pigs scavenged among yesterday's detritus, and motorcyclists sped through the empty main street on their way to who knows where. 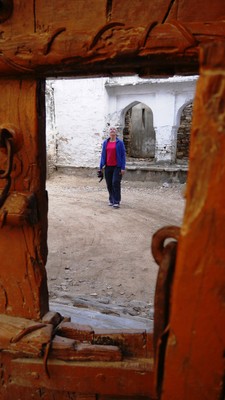 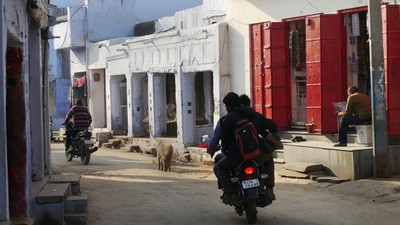 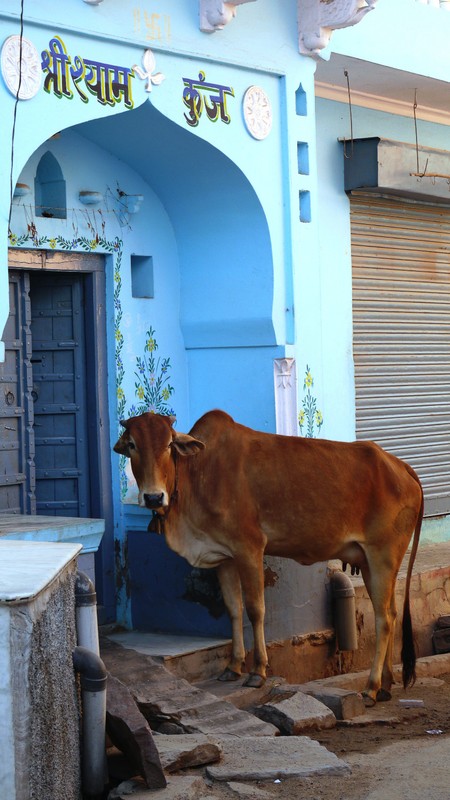 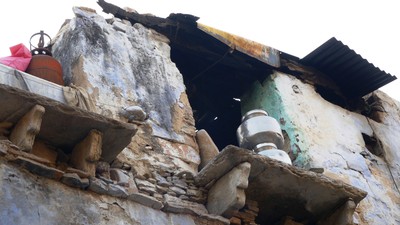 The shopkeeper with his display of sweets and snacks, initially unsmiling and curious, was happy to have his photograph taken - as were the barber with his first customer of the day at his open-fronted shop, the lady selling nothing but bangles, and the elderly gent with ragged red turban and grey whiskers. A lad, smartly dressed in his Modern Public School uniform, politely asked, in impeccable English, for his photo to be taken. It seems likely that few tourists spend time wandering around the town interacting with the local people, for they were so genuinely pleased to stop whatever they were doing to spend a moment talking and laughing with us. 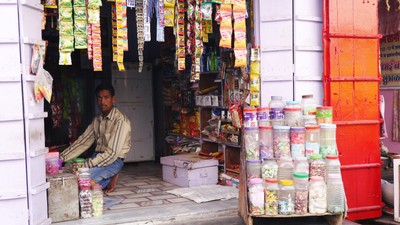 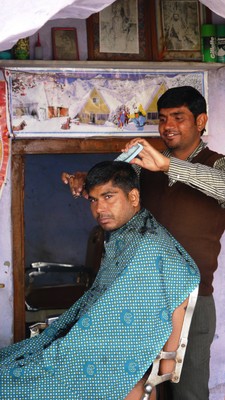 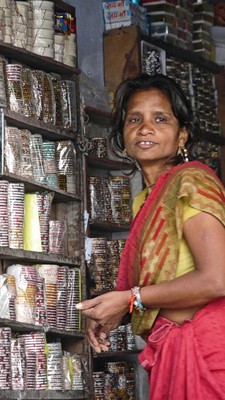 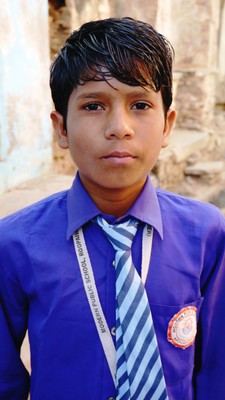 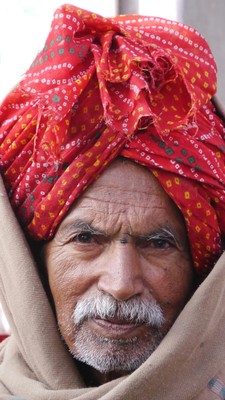 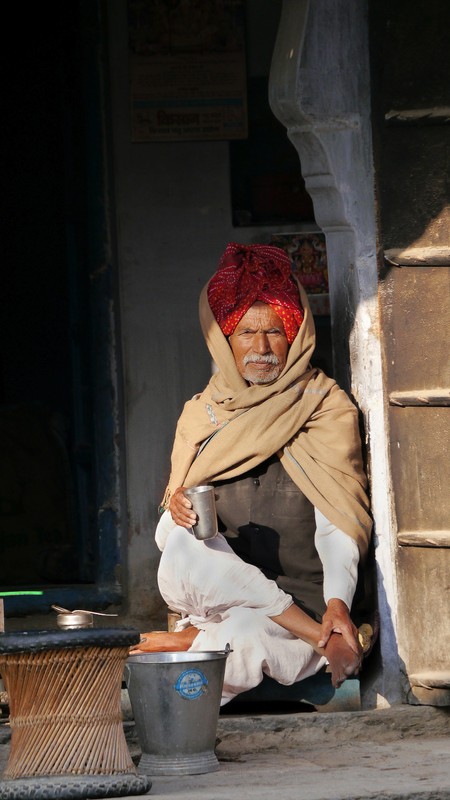 We would have liked another hour or two here, but Sambhar Salt Lake and its promise of exotic and abundant bird-life awaited us, as did Jaipur, Rajasthan's crowded capital city.